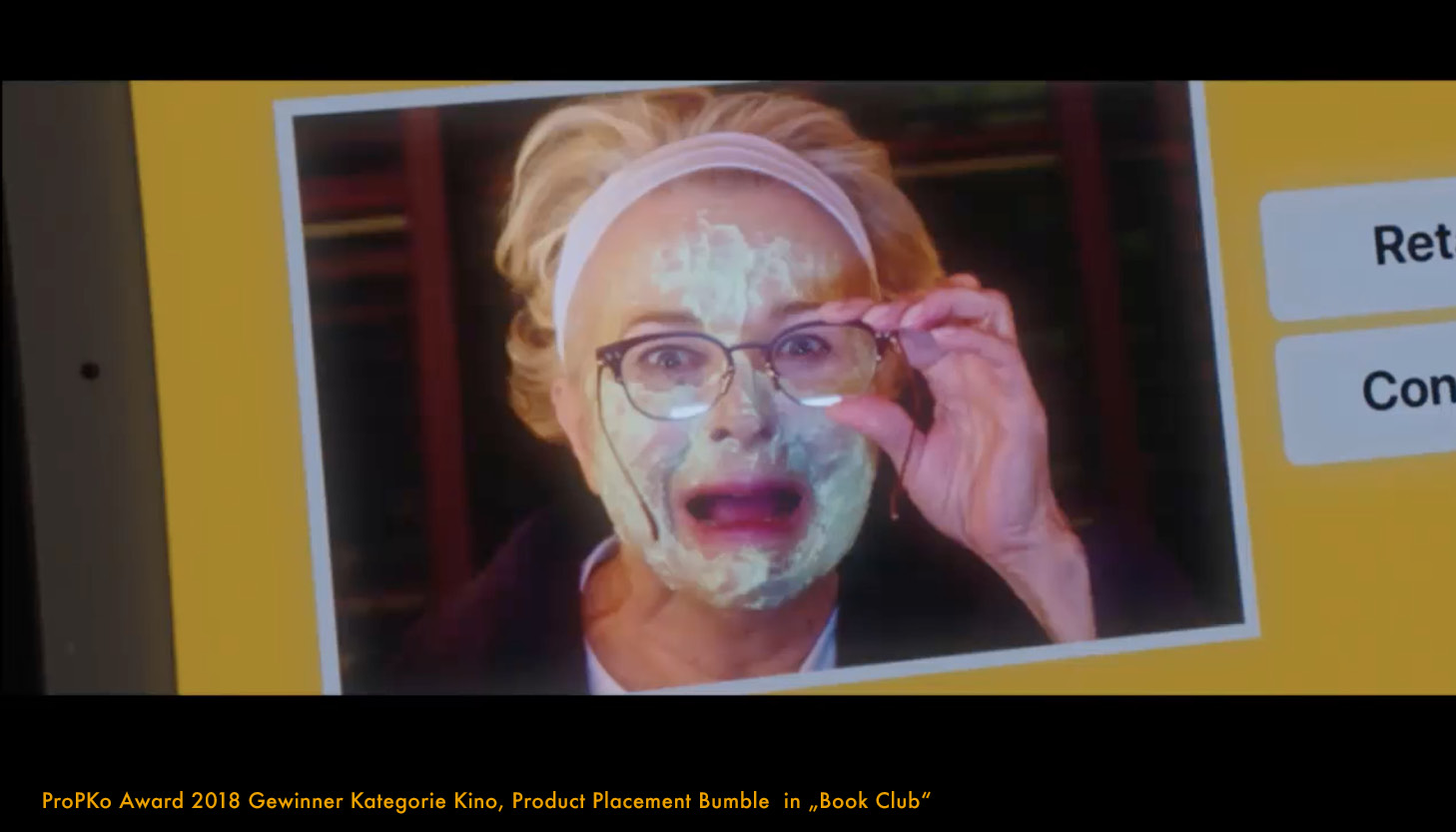 It is well known that people today get to know each other and fall in love more and more online . Embedding a flirting or dating app as a central element in a feature film is new and, as we find it, the Film Book Club has really succeeded. All three leading actresses are already ‘experienced in life’. One of them is looking for a new partner and is very charmingly urged by her friends to use the Bumble app. What particularly convinced us in the jury was the unobtrusive and often humorous way in which the app was operated – just the way you can imagine it in real life. The film thus provides an instruction for action for the app. With lots of details like an accidental funny photo or what happens when you delete the app and then want it back. This is an outstanding example of what the communication instrument Product Placement can achieve – the results for the film and the company Bumble were correspondingly successful.
Congratulations! 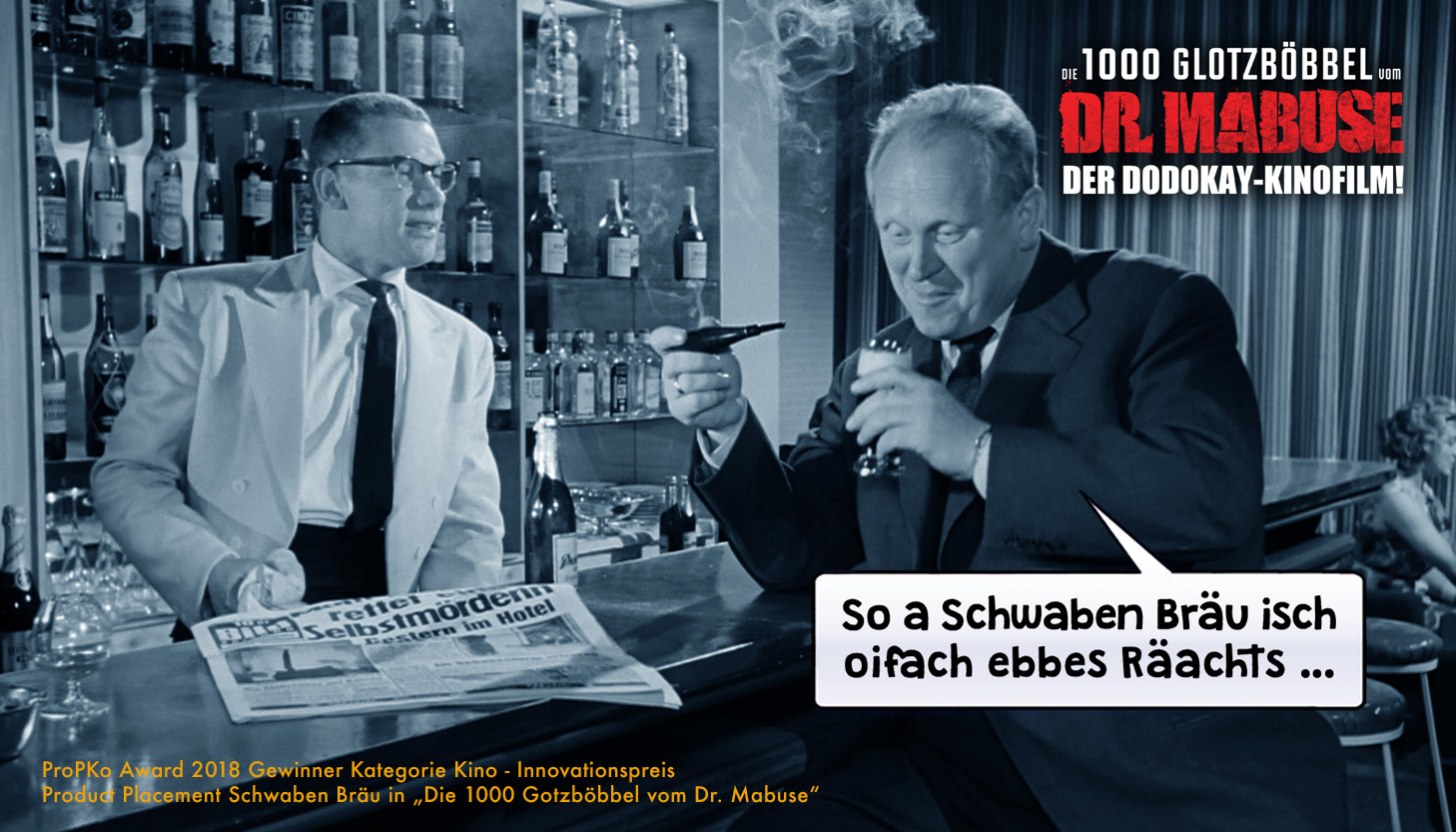 There hasn’t been anything like this at the cinema before: The film itself is an innovation – as is the product placement of Schwaben Bräu! The original film was already produced by CCC Filmkunst in 1960 and had its premiere in Stuttgart. The Swabian filmmaker and comedian Dominik Kuhn took on this film in order to dub it into Swabian, just as he has shown it since 2006 on YouTube & Co. with other films “Star Wars”, “Lord of the Rings”, James Bond and many more – with the difference that he should now apply his skills to a feature-length cinema film. A very demanding task, which Kuhn masterfully solved by not only letting the actors speak Swabian, but also transferring the plot into the here and now. He has re-cut the film for this purpose, partly re-recorded scenes and lets the Swabians invent the Internet in the new plot. The Schwaben Bräu brand was integrated into this new production. On the one hand with skillfully placed verbal placements, an actor says e.g. “Why don’t you have a Schwaben Bräu at the bar”? And on the other hand through digital image processing technology with the integration of the Schwaben Bräu logo in film scenes. The jury honoured the innovations that an existing brand was digitally and verbally integrated into an old film and played out regionally. As well as the fact that this brings a phenomenon existing in the USA for videos called fandub to the cinema in Germany. Through this placement, Schwaben Bräu has opened up an innovation in the art of cinema, which could possibly establish a new genre. Congratulations!

The jury also had to decide between several good projects in the TV category. In the end, the Austrian Federal Economic Chamber was in the lead with its broadcasts on consulting services for small and medium-sized enterprises. Several informative programmes about small businesses, from costume rental to sausage stands, were produced. In every film the expert of the Chamber of Commerce appeared very appropriately and explained how the entrepreneur can be helped. The achievements of the Chamber of Commerce were impressively illustrated by concrete examples.
For us as the jury, the decisive factor in the end was how the dry topic of “succession planning” was implemented so entertainingly and yet with content. This successful combination of information and entertainment was the deciding factor and lifted the project to first place. We congratulate to this success!

With a very well thought-out campaign the agency OMD Germany succeeded in stopping the stagnating sales figures of the popular NERF guns and turning them into an upswing. The idea behind this was to take the young people away from the game consoles and encourage them to play actively again. This idea was supported by video idols or influencers from the game area. In the online campaign, two influencer groups, equipped with NERF guns, compete against each other. So they play against each other, explain the rules of the game and introduce the game to their followers. The resulting videos were distributed via YouTube, Instagram and Facebook. The success of the campaign is not only reflected in the fact that a follow-up campaign with even more influencers is already being carried out. The jury was convinced by the creative idea and the skilful implementation and considered it worthy of an award. We congratulate the makers on the award!

With the realization of the Audi e-tron Vision Gran Turismo, Audi has once again demonstrated its courage to innovate.
The possibility, already used by many automobile manufacturers, of developing a concept or a Designing a prototype vehicle specifically for the PlayStation Hit Gran Turismo was complemented by Audi with an obvious but unprecedented element…
What was initially only planned as a virtual vehicle was now actually developed into a fully functional and extremely powerful electric or Hybrid super sports car built and used for real racing events.
For example, the Audi e-tron Vision Gran Turismo was used as a futuristic racing taxi in many Formula E races and exclusive test drives with the car could be won.
Various accompanying co-promotion materials, e.g. Video features highlighted the central aspects of the project for interested users.
A strong PR premium & global press pickup as well as the continuing interest in the vehicle in all social media were the (almost logical) result.
The jury judged this to be a true “Vorsprung durch Technik” (progress through technology) and awarded the submission Audi e-tron Vision Gran Turismo the ProPKo Award 2018 in the Game category.
Congratulations for this award!